Economic weakness abounds! The country is in recession and exports are “stalled” according to the Bank of Canada. But if you dig into the numbers, something bigger is happening.

The first five months of export data show a huge 31% decline in oil, with natural gas falling 40%, a devastating hit to Canadian exports. The big question is whether the positive effects of a weaker dollar and a stronger U.S. economy can make enough of a difference. Skeptics remain doubtful about whether our exporters have enough capacity for a big increase in production: there are no state-of-the-art Canadian factories waiting for the lights to be turned on.

One of the most optimistic forecasts for 2015 came from our friends at Export Development Canada. Their forecast for 2015 export growth was... zero. A big goose egg.

Actually, this was a cheery forecast because they were essentially saying that Canada’s non-energy exports, such as manufactured goods, technology, services and agriculture, would be strong enough to offset the huge, gaping hole from the decline in energy sales.

So far, it looks like EDC is right. Canada’s export manufacturers have ramped up production and are in overdrive. The strongest contributor to growth is the automotive sector, rising 9% this year thanks to a resurgent U.S. economy. American auto sales hit 17.4 million vehicles, record levels not seen in 15 years, as our members in the auto sector are struggling to keep up with demand.

And it’s not just autos; exports of machinery and equipment are up 9%, electronic equipment up 15%, aircraft up a staggering 33%. Services will gain 5% this year thanks to a new rising star: tourism. So, does this make up for the huge decline in energy?

Not quite. So far in 2015, exports are down 1.3%. But if we see greater strength in the second half, as we expect from a U.S. economy that is firing on all cylinders, then Canada’s exports might even get to modest growth.

This means we are in the midst of a very strange recession. Ontario, Québec, B.C. and Manitoba are all set to grow at a healthy 2% range, with solid export growth across-the-board. Only Alberta and Newfoundland will see GDP contracting this year by around 1% and exports tumbling by 15% or more. Canada overall will see GDP rise by just 1% in 2015.

The big challenge is that growth will get harder from here. With a soft domestic economy, we’re increasingly dependent on exports. Thanks to weak commodity prices, further export gains can only come from rising productivity, world-leading technology and innovation. We need a comprehensive plan to improve competitiveness so that Canadian companies can win. 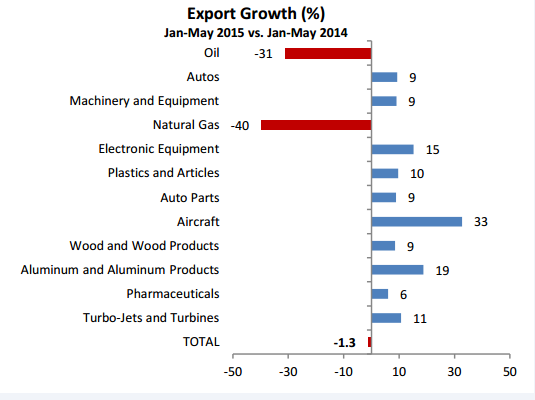