Jan 19, 2020
Satisfaction vs Loyalty: How to turn customers into promoters

Jan 14, 2020
5 minutes for Business - Economic Rewind: A Decade in Review from Canadian Chamber

How to make your point with our elected officials 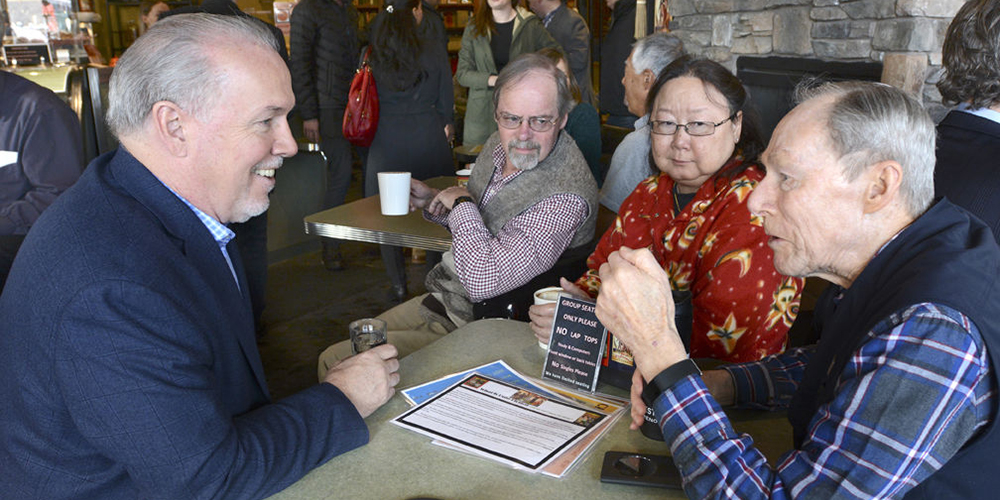 If you want to get things done on a political level, sometimes voting isn't enough. You have to make your case directly to the people at or near the top. But what's the best way to do that? Getting your point across to our elected officials is one of the ways we can boost our civic power and have real impacts for our lives and businesses, so it's definitely a skill worth learning. Here are some approaches that tend to work.

There's a reason everybody who represents you, from the City Council to the BC Premier to the Prime Minister of Canada, has a publicly available email address— it's perhaps the easiest way to reach them with your concerns. While the Prime Minister probably has staff read his email for him, city and provincial officials can often be directly reached via email.

Maxine DeHart, a Kelowna City Councillor and Board Director with the Chamber says she gets a lot of emails and tries to respond as quickly as possible.

“I don’t mind people emailing me or calling me,” says Maxine. “But I do not engage back-and-forth on social media, even though I’m quite active on it.”

If you're able to compose a short, persuasive email or letter putting your concerns across, you might be in contact with the right person just minutes after hitting send. But keep in mind that if you go on too long, you hurt your chances of someone reading it quickly.

“Be concise,” says Maxine. “Sometimes we get 2-3 page letters that we just can’t go through. As Councillors, we’re part-time and we still work our regular jobs. So keep it brief and to the point. If I can’t answer the questions, I’ll find out.”

You might have tried going through channels and you're still waiting for results, or maybe you favour taking a less-formal approach to making your point with an elected official.

One way is to personally lobby for an issue. You can often schedule a personal meeting with your representative in their office for a meeting that could run anywhere from 15 minutes to over an hour. This usually works well, if you can get a slice of their time, since face-to-face conversations can go a long way toward convincing your rep of your conviction and the importance of your issue.

Ron Cannan is a Kelowna Chamber Board Director and former Member of Parliament for Kelowna-Lake Country.

“If you run into an elected representative and have a question or issue you would like to discuss, best to briefly mention what the issue is, ask for their card and ask if you could set up a meeting to discuss,” says Ron. “Even invite them for a coffee. Just remember, whether its an email or face-to-face, stick to the policy and issue. Don’t attack the individual personally.”

You might also consider joining a local organization (such as your friendly local Chamber of Commerce, *cough, *cough). Our events from our formal awards ceremonies to our casual networking functions are regularly attended by City Councillors including Mayor Basran, local MLAs including Norm Letnick, Ben Stewart and Steve Thomson, and our local Members of Parliament Stephen Fuhr and Dan Albas. We even hosted former Prime Minister Stephen Harper at a luncheon this year! Our Executive Director Dan Rogers is also a former councillor and mayor of Prince George, so he knows his way around the political scene as well. Drop him a line if you’re looking for advice!

However you go about contacting your elected representatives, remember that they meet all sorts of people, and you're far more likely to get what you want if you're polite, reasonable and can make a logical case. Before your meeting, or before you send your email, try going over what you want to say with a skeptical eye. Address any weaknesses in your argument before bringing it to your elected official; it's bound to make your argument much stronger and more persuasive.

“Be informed and check your sources,” says Ron. “If you can’t verify your source of information then its best not to get emotional until you have all the facts. Once you have all the facts, then simply inform your elected official of your point of view and explain why you feel the way you do. If you disagree with a policy, then it is very helpful if you can bring forward an alternative idea that might be a better solution to the problem or issue at hand.

Make sure to check out our All-Candidates Electoral Forum Breakfast on October 16 at the Coast Capri. There you'll have a chance to meet the candidates for the upcoming federal election running in the Kelowna-Lake Country and Central Okanagan-Similkameen-Nicola Ridings. Go to kelownachamber.org/events to learn more.