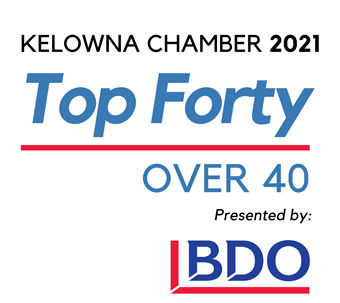 Recognition is the art of actively looking for efforts that make a difference every day.

Our inspiring Top 40 Honourees are forces to be reckoned with and their contributions to the community important ingredients in our area's ongoing success.

BDO's Top 40 Over 40 program celebrates remarkable individuals in our community over the age of 40 as a means to showcase mentors, champions and role models who encourage and foster the future leaders of our community. Partnering with the media in the valley, the Kelowna Chamber highlighted Honourees between February and July 2021.  Each year the program alternates between Over 40 and Under 40 Honourees. 2021 was an "Over 40" year.

Watch the replay of the celebration event for our 2021 Top 40 Over 40 program, presented by BDO LLP, below.

BDO LLP and The Kelowna Chamber of Commerce are thrilled for the sixth year of this exceptional program which recognizes excellence in our community. Top 40 honourees have contributed in one or more of these areas:

The Featured “Top 40 Over Forty” selected individuals were featured weekly between February and July. Nominations were reviewed monthly between January and March.

Note that the Program is limited to individuals in the Central Okanagan who are over the age of 40 as of January 1, 2021. If a nominee has been previously recognized by this program, they are not eligible to be recognized again in 2021.

The 2021 Top 40 Honourees were highlighted weekly on our website. Profile features appeared in the Kelowna Capital News; in Okanagan Edge; interviews on Bell Radio AM1150; and on social media (Kelowna Chamber and BDO LLP).