Kelowna should be proud of its Young People

The latter is a joint venture between the Kelowna Chamber's Young People in Business Committee; JCI Okanagan and The Daily Courier, and wouldn't be possible without the support of BDO.

Basically,Top Forty Under 40 is a 40-week campaign highlighting outstanding individuals in our community who are under the age of 40. They are featured weekly on the front page of the Business section of the Wednesday edition of The Daily Courier.

The response to the program has been overwhelming and the calibur of the nominees, staggering. Kelowna truly is the home of many well-rounded and established young people -  and we're thrilled to show our support and salute them. 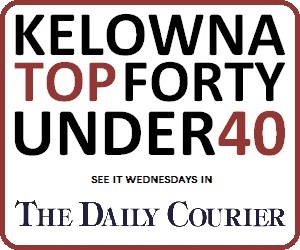