Interest Rates: How Low for How Long?

How many times have Canadians been warned that interest rates will increase eventually? What a surprise when the Bank of Canada lowered the rate to 0.75%, a move that no economist had predicted.

The big question is what does it mean for Canadian business? The first and most immediate effect was to weaken the dollar, which fell 1.5 cents following the Bank’s announcement to $0.81. Going forward, we’ll see even more pressure on the loonie. The market expects the U.S. Federal Reserve to start raising interest rates sometime in the second quarter of 2015. That’s not going to happen in Canada, and in fact, there is a slim chance that our rates could go even lower. As a result, investors will move out of Canadian securities towards the U.S., weakening the loonie even further.

In terms of the actual cost of business loans, we are unlikely to see much change. In normal times, the Bank of Canada’s official overnight rate provides a basis for the private sector banks’ prime rate. But when official rates get really low, this relationship breaks down. Banks have to cover their cost of funds—the amount they pay to borrow plus their administrative costs— which is higher than 0.75%. This means that banks probably won’t lower their prime rate; most will keep it at 3%. In the U.S., the prime rate is 3.25% even though the Fed’s official rate is near zero.

What about longer-term bonds? Those yields edged downwards, but these have been headed lower for a very long time. In fact, they’ve been trending downward for the past 15 years right across the developed world. According to the IMF, this is because emerging markets like China have accumulated huge amounts of reserves and as they keep buying rich country bonds, rates are held down. At the same time, market crises have pushed investors away from riskier assets into sovereign bonds, while uncertainty has depressed global business investment so there is little demand from borrowers competing for funds. The IMF believes that long-term interest rates will eventually return to the 3-4% range but not much higher. 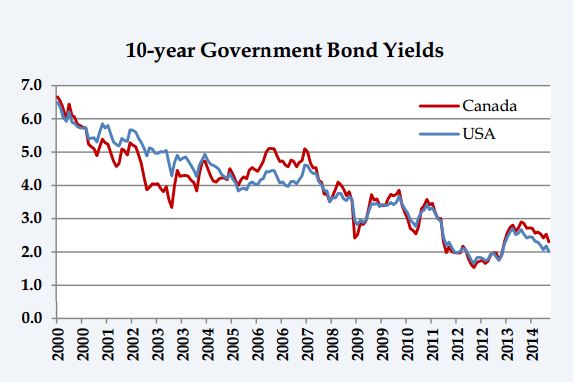 Finally, last week’s rate cut speaks volumes about the Canadian economy. There has been a lot of speculation in the media that maybe lower oil prices could help keep Canada on balance if the negative impact on oil producers is offset by stronger manufacturing in Ontario and Quebec. The Bank clearly disagrees: Governor Poloz called low oil prices “unambiguously bad” for Canada. In fact, a lower loonie is good for some manufacturers, but the beneficial effects could take time to materialize, and consumers may not rush out and spend the money they save on gas.

Nevertheless, we believe oil prices will get back to the $60-$70 range by year-end. An accelerating U.S. economy combined with an 80-cent dollar will eventually boost our exports. Stronger economic growth is ahead, even if 2015 is a rough ride. And eventually, interest rates will rise. When we joke that interest rate warnings are like “the boy who cried wolf,” remember the moral of the story. The wolf eventually does show up (though not until the second quarter of 2016).