The Kelowna Chamber of Commerce announced today that Jeff Stibbard has been named Business Leader of the Year for 2019. The prestigious award recognizes and celebrates Stibbard, Founder of Kelowna’s JDS Group of Companies, for his outstanding contribution to the business community in the Central Okanagan and to Canadian business.  He will receive his award at this year’s 32nd annual Business Excellence Awards ceremony at the Delta Grand on Friday November 1st. Tickets are still available online at www.kelownachamber.org until 4:00 p.m., Monday October 28.

“We’re thrilled that our Business Excellence independent judging panel has chosen Jeff Stibbard as the 2019 recipient of our much sought-after Business Leader of the Year Award,” said Nikki Csek, President of the Kelowna Chamber. 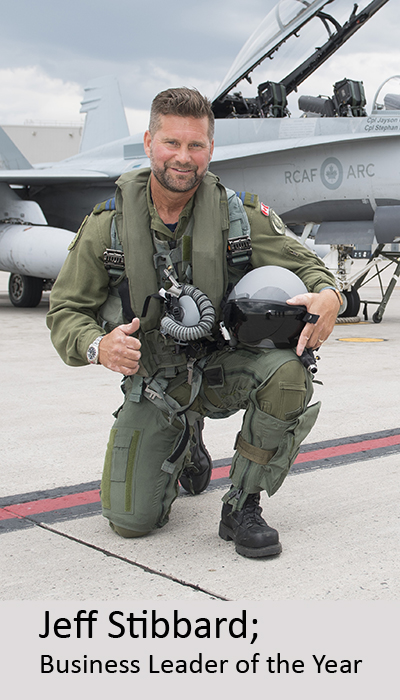 “Jeff and his family,” said Csek, “have enriched our city, our province and our country to a mind-boggling degree. What he has done for the resource sector, and how he has ethically enriched communities both in Canada and around the world, is remarkable. We are so lucky to have him right here in Kelowna.”

“JDS,” says Jeff, “embodies values of professionalism, honesty, integrity and no harm to people, environment, assets, and reputation. These values are constantly demonstrated in the execution of our work. We deliver the highest commitment to cost, schedule and quality to our resource industry partners in some of the harshest (highest elevation, deepest, coldest, hottest, remotest, most humid, driest, and riskiest) locations on the planet with alacrity. We get it done.”

MNP LLP is the long-time sponsor of the Business Leader of the Year Award and will be presenting the award to Stibbard on November 1st at the Chamber event.

Jeff Stibbard, P.Eng
Jeff is the CEO and owner of the JDS Group of Companies. He’s 54 years old, married for 33 years to wife Brenda, with two adult sons and one daughter in-law. The family has lived in 13 northern and western mining communities in Canada, finally settling in Kelowna as their home.

Stibbard is a professional mining engineer graduate from Montana School of Mines. He’s worked his entire 36-year career in the mining and energy industry from being a laborer, welder, driller, miner, shift boss, mine manager, to CEO and director serving on the boards of several Canadian listed public companies.

Past notable accomplishments include: Senior Manager of the leadership team that successfully designed, permitted, funded, built and operated Canada’s first diamond mine (BHP-Ekati) in the NWT; and of one of the largest oilsands mining operations (Shell Albian) in Fort McMurray.  Jeff was also the leadership partner in developing several high performance First Nation resource services businesses in Northern and Western Canada (NWT, Yukon, Alberta, and BC).

He’s an active supporter and volunteer, most recently serving as the Honorary Colonel of the Royal Canadian Airforce, providing ongoing mentorship and support to active Canadian Airforce personnel. He has raised over $100,000 for military families through JDS. Plus, he’s an advocate for and employer of retired and transitioning Canadian military personnel.

Jeff is a serial and serious entrepreneur, who attributes much of his “fortunate” success to meeting, working with, and receiving guidance from some of the mining industry’s most successful leaders.  As a beneficiary of this experience, Jeff says, “I am focused on creating the same opportunities and motivating others to invest in themselves and be a productive Canadian leader.” He advocates for responsible resource and infrastructure development throughout Canada and the North.

JDS is a private corporation founded by Jeff Stibbard in Kelowna in 2004 to seek and capture maximum value on behalf of resource customers and partners.  The Group of Companies consists of industrial business units: JDS Energy & Mining Inc.; Jeffco Aviation; JDS Resources; Jeffco Equipment; Cariboo Central Railroad Contracting; JDS Energy Partners; & CanMag Industries.
The JDS Group, although based in Kelowna, conducts 95% of its business outside the city, and more than 50% outside Canada.  The Kelowna offices and shop employ approximately 25, primarily in finance, administration and aviation.  Worldwide, JDS employs over 350 men and women as engineers, tradesman, underground miners, operators and management professionals.

Kelowna is home to more than 50 of these employees and their families who travel to work on various assignments in the mining, construction, railroading and heavy industries throughout the world.

Kelowna is attractive to JDS because of its business-friendly environment. JDS takes part through corporate contributions and community involvement; and is driven by results and business leadership including delivering Canadian values to the people and communities in which they work around the world.

Stibbard says, “Our growing business success is a result of the business freedom, favourable taxes and security of property afforded to us in Canada. We do our part as a leading corporate citizen to invest in the development of accountable citizens: healthy residents by donating to sport; building strong minds through donating to education; building strong souls through personal mentoring; and strong communities by donating to healthcare and the performing and visual arts.”

Stibbard goes on to say, “We are a family company that not only employs our direct family (two sons) in the business, but also many of our close friends and their family members who have been a big part of our overall success in life and business. We have created scholarships and supported keen young locals in the engineering and trades fields to facilitate their employment in our industry.”

JDS Energy & Mining has received many industry awards and accolades since its founding, including from the Kelowna Chamber, Mining Association of BC, and Montana School of Mines.