Feb 16, 2020
How A Minimum Viable Product Can Help You Test Your Next Big Business Idea

Investing in Kelowna: What makes it work

Here at the Kelowna Chamber of Commerce, we hosted four Chamber luncheons in four weeks between January 28 and February 18. What a range of ideas and speakers we heard!

From the President of UBC, Martha Piper on the university’s tenth anniversary in the Okanagan, to the CEO of Eagle Spirit Energy talking about their social license for BC/Alberta pipelines; to the Mayor’s Annual State of the City message, to wrapping up with Premier Christy Clark speaking to the 2016 provincial budget. Our members and guests are richer for these interactions with informative, interesting, and decisive speakers.

As a Chamber, we’ve been working in parallel on a number of fronts, not all immediately apparent to the general public. Advocating for support in the fight against invasive mussel species in our lakes. We are proud to be helping lead this fight. A change in the punitive tax proposed for credit unions.

We hosted a high-level panel discussion at the end of February to explore the needs, the changes, and the advocacy for amended legislation. Homelessness: we’re hosting a Think Tank on this issue to search for timely methods of seeking affordable housing in early March, in partnership with the Urban Development Institute. And, of course, discussing the political hot potato that is water quality in Kelowna, home of five water districts, and a myriad of opinions of how to address the needs.

Since our Chamber is the face of Kelowna, I thought it might be timely to look back at the Mayor’s mid-February address, and highlight current thinking from our City on some of these issues.

This was Mayor Colin Basran’s second “State of the City” address to our Chamber, and he has kindly agreed to our excerpting his comments for this month’s column. I admire his stress on attracting investment, always the holy grail of a civic government.

His key point was speaking to the investments being made in our community. “What,” he asked, “is the City doing with our investments to make Kelowna a place where other people want to invest?”

A key priority for Basran is water quality.

Basran rightly points out, “There’s a strong connection between health and economics, and Council’s efforts to move toward an integrated water supply network. Our water system really represents what I am talking about today – public safety, effective financial management, being strategic to ensure efficiency and investing in the infrastructure that improves our quality of life.”

Water is a priority discussion point within our Chamber, as well. The Kelowna City Council has made a commitment to a process that ultimately can change the pattern of water delivery to our residents. This process isn’t immediate, but importantly, Council has plotted out the first steps toward integration of services, and quality improvement. We support being a part of this process which is being conducted with thought, planning, and no rush to judgement or immediate change.

The media that same week reported that the Mayor also noted Kelowna was the next-to-worst to find a job, fastest-growing, and (surprise!) almost the sexiest city in Canada.

Skipping over the city’s “sexy” rating from retailer Pink Cherry (#5 behind a collection including Sudbury), the BMO labour market report was sobering, putting Kelowna at 32 out of 33 for getting a job. Basran pointed out it was a 30-day snapshot, and at odds with the Stats Can report showing Kelowna to be fastest growing between July 2013 and 2014.

Of course, the major number of cranes hoisted up over the city recently don’t hurt our business profile: Okanagan Centre for Innovation, Interior Health, some new waterfront construction at the north end, and fingers crossed, by next year, a new convention hotel on the water at the foot of Bernard. And don’t forget the new police headquarters.

Strong words from a strong Mayor and a supportive, yet individualistic-minded Council who have the best interests of their constituents front and center. I am fortunate to head a Chamber of Commerce based in such a strong bastion for forward-thinking, planning, and investment, and not fearful of change and improvement. 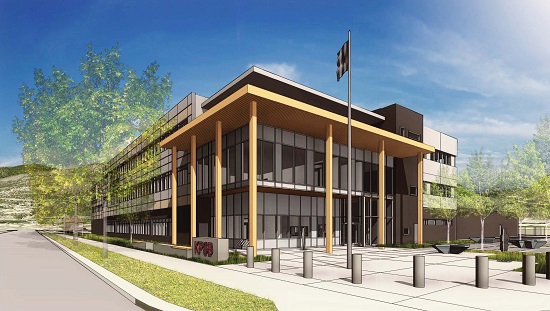