B.C.'s government is trying to divide our nation. Here's how Trudeau can stop it

In 2018, Canada marked its 150th anniversary with activities that brought us together to celebrate our history and to consider our bright future as a nation. Just months later, however, Canadians are confronted with an issue that goes to the very core of our understanding of what Canada is: are we one country, or thirteen?

This is not an academic question. The B.C. government’s attempt to halt Kinder Morgan’s Trans Mountain Expansion project poses a direct challenge to the federal government’s authority, undermines Canada’s regulatory processes and divides our country along the Rocky Mountains.

Trans Mountain received federal approval after an extensive, rigorous, scientifically valid review with input from thousands of stakeholders. At the end of that process, Kinder Morgan accepted the numerous federal and provincial conditions imposed on the project. Despite all of this, and the federal government’s stated position that Trans Mountain is in the national interest, it remains in limbo because the B.C. government says so, even though the province has no constitutional, legal or moral standing to do so.

This has forced the company, which has already invested over $1 billion in the expansion, to suspend the project at a time when it was ramping up to begin work this construction season. According to Kinder Morgan, that work would have resulted in spending of between $200 and $300 million per month.

"Every political party and every member of Parliament need to take a stand."

While that decision is bad news for the potential beneficiaries of that spending, including the taxpayers of B.C. and businesses across Canada, the company is perfectly justified in acting to protect the interest of its shareholders. Investors are right to question the worth of Canada’s regulatory regime if, at the end of the process, a province can obstruct and overturn a federal decision because it disagrees.

Investment in Canada — both foreign and domestic — was already under severe pressure before these developments. Direct investment dropped by 26 per cent in 2017, and that was before the U.S. tax and regulatory reforms were fully in place. Just last week, RBC’s chief executive, David McKay, warned that investment capital was fleeing Canada “in real time.” As that money leaves Canada, it takes with it the jobs, the skills and the tax revenues that support Canadian government programs.

At the end of the day, however, this issue is about more than pipelines or tax revenues. It is about who speaks for Canada. What recent events have demonstrated is that provincial governments have neither the ability nor the desire to speak on behalf of Canadians as a whole. Only the government of Canada has a mandate to defend the national interest. It must leave no doubt of its determination to do precisely that.

We should all welcome the federal government’s stated support for the Trans Mountain project. However, it now needs to move from words to action. This is particularly pressing given that Kinder Morgan has set a deadline of May 31st to decide if it will terminate the project.

Ottawa must take concrete steps to show leadership and resolve the standoff with B.C. On Sunday, the prime minister is scheduled to meet with the premiers of Alberta and B.C. in an attempt to reach agreement on moving forward in the national interest. He must make it clear that the government will work with all stakeholders to ensure that the environment is protected, but will neither be held up to ransom nor waver in its determination to get the job done.

Hopefully, he will succeed, but if there is no agreement, then the prime minister should meet with the leaders of the other political parties to inform them that, as his first action when Parliament resumes next week, he will present a motion to add the moral authority of Parliament for decisive action to the legal authority Ottawa already possesses.

Every political party and every member of Parliament needs to take a stand. When the nature of Confederation itself is in question, there should be no room for equivocation or dissembling.

At the same time, the government should spell out the other options — legal and financial — at its disposal to ensure the Trans Mountain expansion is built. Then it must make it clear to everyone that it has both the tools and the will to use them.

Almost a century-and-a-half ago, British Columbia’s government insisted as a precondition of joining Canada that Ottawa build a railway to tie the province to the rest of the country. It understood that a real country had to be more than a collection of scattered settlements. We would only succeed if all regions could do business across provincial borders. It is both ironic and sad that B.C.’s current government sees fit to use legal manoeuvres that pull at the fabric of Confederation itself.

Resolving this impasse will not be easy. The short-term political risk of getting this wrong is something all political parties are almost certainly weighing carefully. But our country will be better for it if the government takes swift and resolute action. 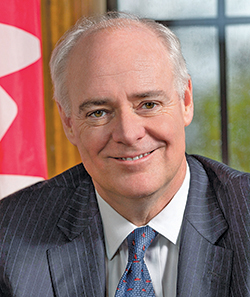 A descendant of one of Canada’s most prominent manufacturing families, Perrin grew up in Fergus, Ontario and graduated from the University of Western Ontario in 1971.

Perrin was first elected to the House of Commons as a Progressive Conservative in 1972. During his 21 years in Parliament, he served as Minister in seven different portfolios, including Treasury Board, National Revenue, Solicitor General, Defence, National Health and Welfare, Communications and External Affairs.

In 1994, Perrin joined a number of private sector boards and worked as a consultant in the field of communications. He was an Honorary Visiting Professor with the Department of Political Science, University of Western Ontario. From 1995 to 1999, Perrin was President and CEO of the Canadian Broadcasting Corporation. In 2008, Perrin was named Chancellor of the University of Ontario Institute of Technology. In 2013, he received an honorary degree, Doctor of Laws, honoris causa from Western University. In 2016,
Perrin received an honorary degree, honoris causa from University of Ontario Institute
of Technology.